White support for Obama in the States

Here's an example of a pollster overanalyzing his data:

So whites are less likely to vote for a black man if there are "too many" blacks living in the state? I don't think so. Look closely at his chart and you'll realize that the entire basis of his inference relies on data from 3 states - Louisiana, Mississippi and Alabama - which just happen to border one another.

White support for Obama varied by region, not by the number of blacks in each state. Obama did most poorly among whites in the deep south and in Mormon country. He did best in the northeast and on the west coast. White New Yorkers don't have the same values as white Mississippians. Voters in Vermont disagree with voters in Utah on just about everything. People in different places want different things and it shows up at the polls.

Simply plotting the data on a map shows a very precise pattern - slightly different in the western US than in the east, but with clear regional trends. 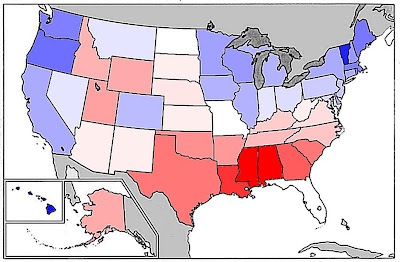 Take a trip from Alabama north to Maine, Michigan or Minnesota and you'll find yourself in states that are progressively friendlier to Barack Obama, irrespective of the percentage of blacks in each state. Even West Virginia, which many were suggesting was filled with white racists, fits the pattern perfectly (more supportive of Obama than Virginia and Kentucky, less supportive than Ohio and Pennsylvania). 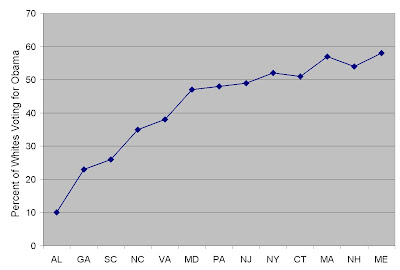 Obama's support among whites in states along a path from Alabama to Maine. Does this look random to anybody?

Suddenly, the "considerable variation in the percentage of whites who voted for Obama" becomes very predictable.